Transformer based on PQ40/40 temperature model

The aim of this application note is to compare a frequently used thermal model that can be found in the articles and catalogs of manufacturers of magnetic cores, with temperature data measured under real conditions in our laboratory.

The temperature model used in this Application Note was presented in the paper "Predicting Temperature Rise of Ferrite Cored Transformers", by G. Orenchak. It proposes a simple equation for estimating the temperature rise depending on the total losses in the magnetic element, i.e., the sum of the core and winding losses, and the surface area of the component.

The losses were calculated using analytical models: For the core losses the iGSE method proposed in “Accurate Prediction of Ferrite Core Loss with Nonsinusoidal Waveforms Using Only Steinmetz Parameters” was used, whereas for the winding losses the Modified Dowell’s equation proposed in “Winding resistance of litz-wire and multi-strand inductors” was chosen.

A total of 6 measurements were done to the following transformer: 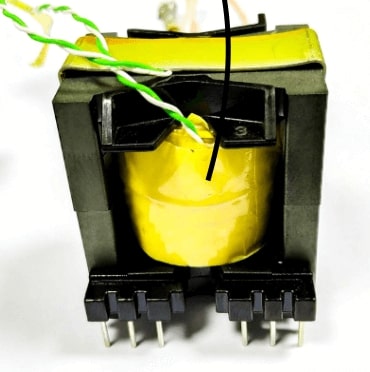 The study of the temperature on this transformer was performed over two different switching frequencies, 50 and 200 kHz, and in 3 different conditions:

The resulting data is presented in both graphs to the right. From the measured data, it can be seen that the temperature increases with the losses and the frequency, as expected. Similarly, this behavior is replicated in the data predicted by the model, but with an underestimation error between 10% and 24%. In addition, it is independent of the balance of losses between the core and the winding. 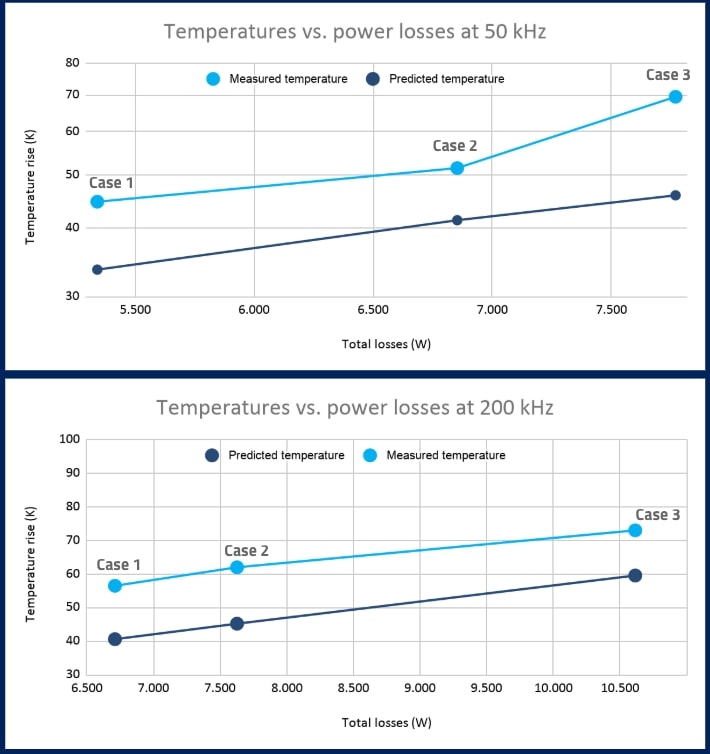 The use of the studied model for calculating the temperature rise of a transformer has some advantages, such as its simplicity and a low computational effort, and can be helpful for a fast estimation of the temperature at the steady-state of a design. However, for designs in which the temperature is a critical factor this model is unsuitable, and it is necessary to use other methods like Finite Elements Analysis, or more complex models such as those based on Artificial Intelligence.

The Importance of Hysteresis Losses in LLC converters

The most advanced magnetics design technology is now online