Key aspects to take into consideration the design of the transformer

The Phase Shift Full Bridge (PSFB) topology is one of the most common topologies used in the industry for designs with power levels above 500W. The transformer plays a key role in the operation of the converter and the objective of this application note is to understand the most important parameters and design trade-offs to be taken.

To achieve soft switching in the semiconductors (especially in MOSFET), the parasitic capacitance should be discharged during the dead time (DT). The energy needed for discharging this capacitance is the energy stored in the leakage inductance or series inductance as Figure 1 shows: 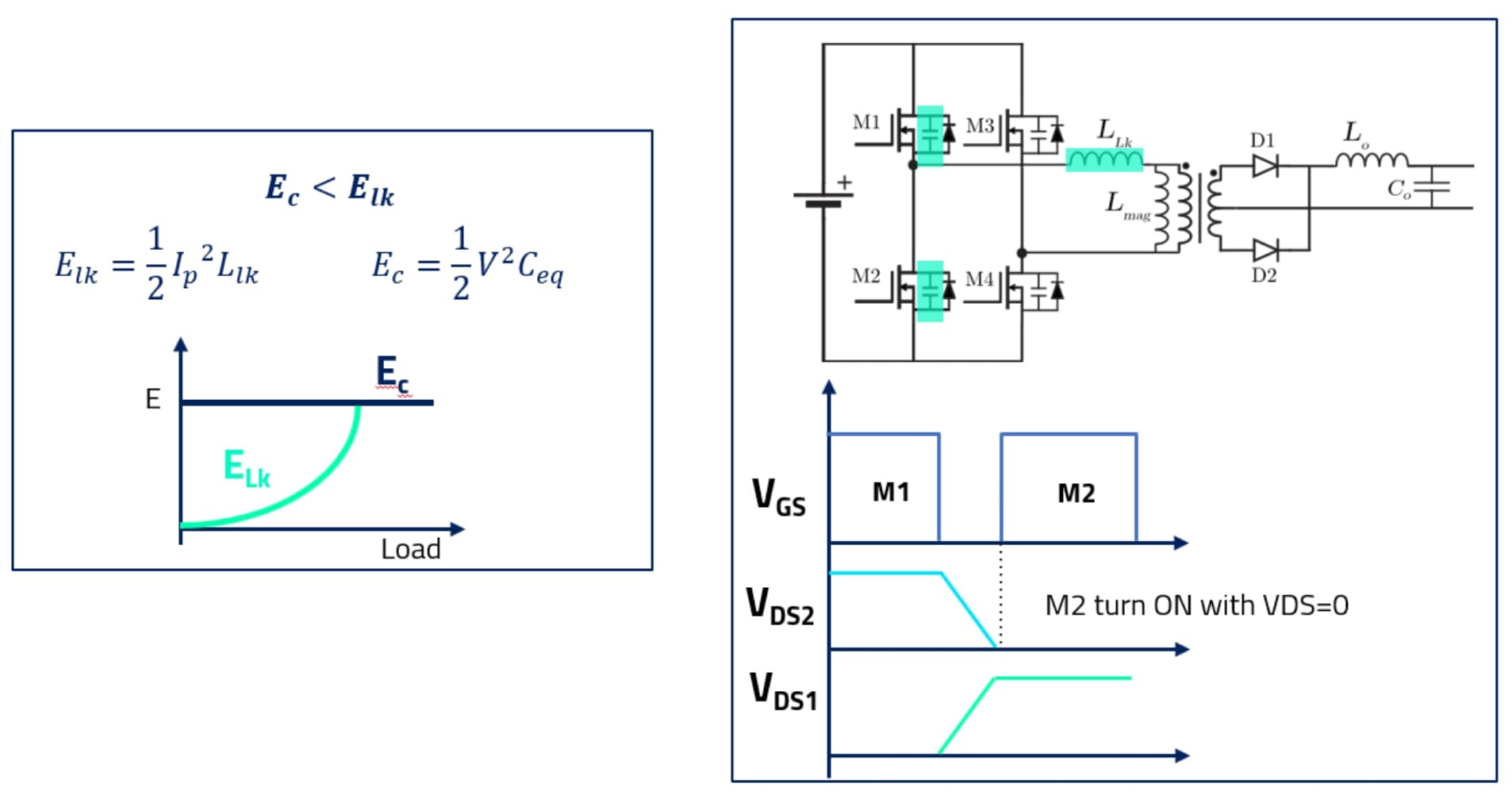 Including an inductance in series with an ideal transformer will affect the total energy transferred; this inductance limits the slope of the current and reduces the effective duty cycle applied to the transformer and therefore, the total energy transferred. It is quite important to take this effect into account to ensure the output voltage regulation. Figure 2 shows an example of the duty cycle loss seen primary and secondary side voltages of the transformer.

As can be seen, the leakage inductance could be increased by a factor of ten by separating the wires. However, AC winding losses would be greatly affected and could lead to thermal runaway and transformer failure. It is important to note that partial interleaving (PSSP) is shown in Figure 5. A little further reduction of the leakage inductance could be achieved by using a full interleaving arrangement (PSPS) at the cost of a higher interwinding capacitance.

The transformer turns ratio should be selected to ensure full power delivery at minimum input voltage. Decreasing the turns ratio increases the primary current and extends the ZVS range at light loads but it also increases the reflected voltage on the secondary side rectifiers (Vsec = 2 ∙ Ns/Np ∙Vin). Figure 5 shows an example of the primary side current level with different turns ratios.

Three aspects should be considered in the selection of the magnetizing inductance:

It shall be noted that high magnetizing inductance values usually rely on the ferrite core tolerance which has a typical value of ±25%, otherwise, the required number of turns in the primary side could lead to excessive conduction losses. For reduced magnetizing values the use of gap would be needed and a tighter tolerance (±5-10%) could be achieved. 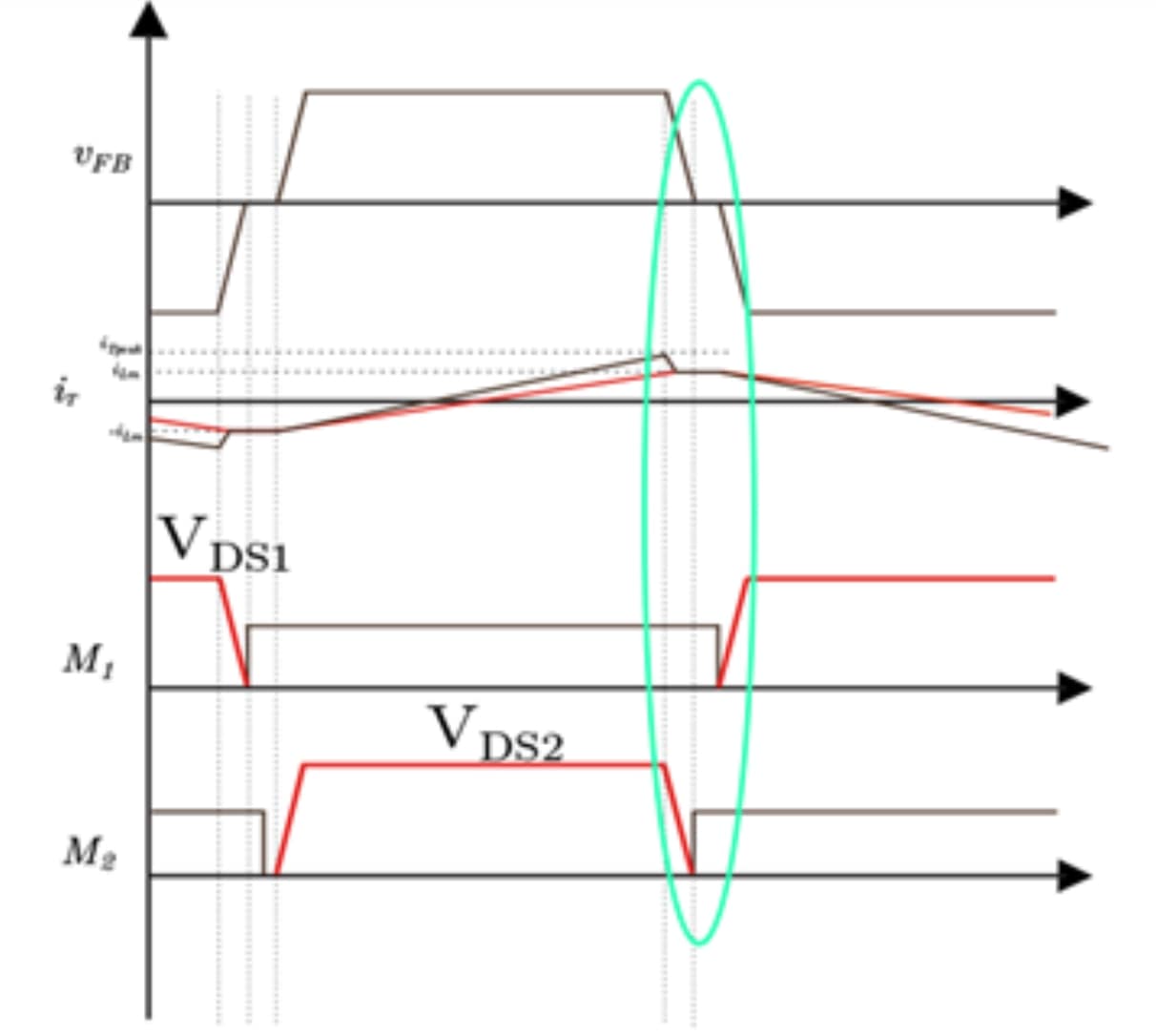 Power converters are a source of noise that requires an input EMI filter for EMC compliance. The transformer could have a great impact on the system EMC performance since its interwinding parasitic capacitance would create a path for the common mode currents. Thus, at the design stage, its value should be considered, evaluated and if needed a faraday shield should be used between the windings. This parasitic capacitance effect should be especially considered in planar transformers where 400 pF to 1 nF interwinding capacitance could be easily found.

Figure 7.  Impedance plot comparison of a transformer with medium and high self-winding capacitances.

The PSFB converter should be operated below the resonance frequency of the transformer where it has the desired inductive behavior.

The transformer plays a key role in the performance of the PSFB. Several parameters and trade-offs need to be considered and taken at the design stage. A good prediction of the parasitics would help in having a smooth project with low EMI noise, improve the semiconductor performance, and overall system efficiency.