At low-frequency applications, laminated cores are commonly used to reduce eddy currents. The material employed for this construction is electrical steel, which allows slicing a solid core unlike ferrite materials, which are very brittle.

The objective of this APP Note is to introduce laminated cores, explaining why they are used instead of solid cores when eddy currents must be low and some of the difficulties that magnetic designers can find when this core construction is needed.

What are Eddy Currents? 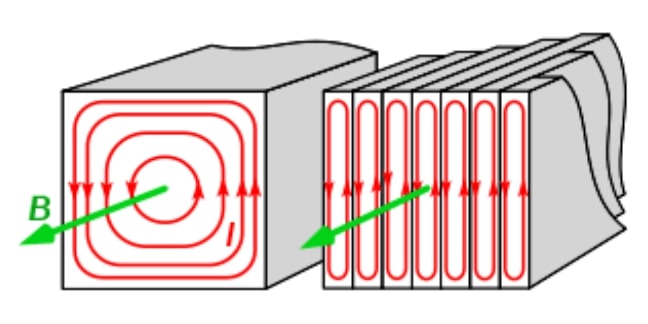 How can Eddy Current Loss be reduced?

The eddy current losses per unit mass can be calculated using the following expression:

From this expression, it can be seen that eddy current losses can be reduced:

Laminated cores are based on the last option, where is divided the core into thin slices, electrically insulated, oriented in parallel to the magnetic flux. 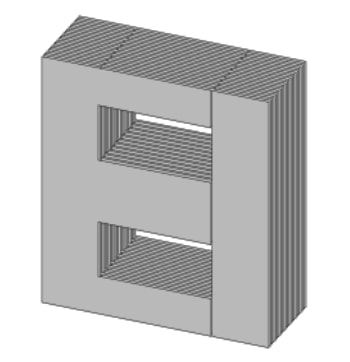 Difficulties in the Design Procedure:

The design of magnetic elements using the construction of the laminated core can be difficult labor, by cause of:

The magnetic element design procedure using laminated cores could be difficult labor due to the huge number of possible combinations in the number of stacks and the lack of information given by the manufacturers. Because of this, sometimes it is a challenge to have a valid design with few iterations and, if the optimum one it's wanted, too much time may be necessary, which entails a high cost of the magnetic element. Frenetic, thanks to its artificial intelligence, can study all the possible combinations and compare it with real measurements for having the optimum design in no more than a few hours.